Board Leadership and Staff

The Access to Justice Board is charged by the Washington Supreme Court to establish, coordinate and oversee a statewide, integrated, non-duplicative, civil legal delivery system that is responsive to the needs of poor, vulnerable and moderate means individuals. The Board works in collaboration with the Alliance for Equal Justice to achieve equal access for those facing economic and other significant barriers. 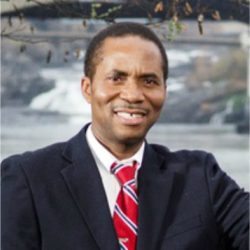 Francis Adewale was admitted to the Washington State Bar in June 2000. He is an
H. George Frederickson Honors Graduate from Eastern Washington University. Francis was born in southwest Nigeria and was sworn in as an American citizen at a special ceremony in 2005 chaired by his mentor, the late Justice Charles Z. Smith, the first African American justice of the Washington State Supreme Court. Francis has served as the Assistant Public Defender for the City of Spokane, Office of the Public Defender since May 2001. In addition to his work as a city public defender, Francis also serves on several community based boards and activities in Spokane and statewide. He is the vice president of JustLead Washington. Francis is a 2009 fellow of the Washington State Bar Association Leadership Institute (WLI) and 2015 fellow of the Equal Justice Leadership Academy. Francis is a member of the Spokane County Regional Law & Justice Council’s Racial Equity Disparity Subcommittee where he currently serves as co-chair. He is also a member of the executive committee of the Access to Justice Board and a member of the Washington State Interpreters Commission. He is one of the attorneys that helped establish the Spokane Community Court. Francis is 2013 recipient of the City of Spokane Human Rights Award and the 2014 Spokane County Bar Association Smithmoore P. Myers Professionalism Award. Francis was appointed by Governor Jay Inslee to the Washington Statewide Reentry Council in 2106 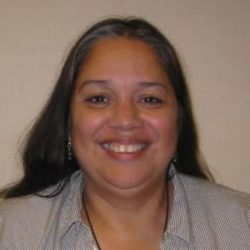 Esperanza Borboa is the Program Director at Eastside Legal Assistance Program based in Bellevue, WA, serving the civil legal needs of low-income residents of NE, East, and SE King County. Her work in the field of civil and human rights stretches back to the late 60’s in East Los Angeles. Marching to end the Vietnam War and protesting the conditions in her high school were the catalyst for a lifelong commitment to justice. She was a leader at El Centro de la Raza for fifteen years, working with farm workers, youth, and expanding our understanding of how we are connected to struggles from around the world. She was a Community Fellow at M.I.T. and worked to further develop the youth leadership model that helped launch the creation of the Institute for Community Leadership in Kent, WA. She was the Program Administrator for Seattle Universities Executive Leadership Program and then the Pastoral Leadership Program. During that same period, she fulfilled a lifelong dream to go to college and received her B.A. in History. Esperanza took part in the Consensus Group to revise the State Plan for the Coordinated Delivery of Civil Legal Aid and is an active participant in the Race Equity and Justice Initiative. She is a graduate of the Leadership Academy and Seattle University's Executive Leadership Program. Esperanza was recognized for her work and leadership by receiving the 50th Anniversary Human Rights Award, United Nations, Seattle Chapter, and the Weyerhaeuser, Keeping the Dream Alive, Martin Luther King, Jr. Award. She is married with four adult sons, four grandsons, and one very feisty granddaughter. Si Se Puede! 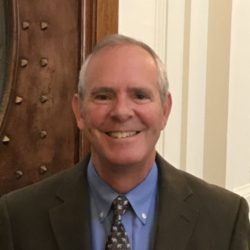 Frederick P. Corbit is the Chief Bankruptcy Judge for Eastern Washington. Previously, Fred practiced law in Seattle at the Northwest Justice Project (NJP). At NJP, Fred handled consumer protection cases, including Klem v. Wash. Mut., 176 Wn.2d 771, and was a member of Washington’s Collection Agency Review Board and the Governor’s Task Force on Homeowner Security. Prior to 2007, in private practice, Fred handled scores of pro bono matters, continuously volunteered at debt clinics, produced numerous publications for those who cannot afford an attorney, and successfully advocated for needed changes, including new laws that expanded debtors’ exemptions. Fred frequently lectures on legal matters, has published numerous articles in legal journals, has taught bankruptcy law at Seattle University, and served as a member or chair of several WSBA sections and committees. Fred received his undergraduate degree from the University of Washington and his law degree from UCLA. 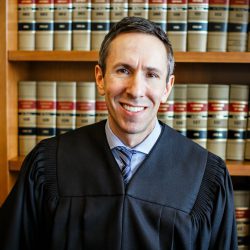 Judge Keenan previously worked in civil practice on numerous pro bono matters, representing detained immigrants, prisoners, and other marginalized communities. Judge Keenan served as Board President at Northwest Justice Project, President of the Federal Bar Association, and as a member of the Board of TeamChild and the Seattle Community Police Commission. Judge Keenan also spent nearly 15 years in law enforcement, working full-time as a federal agent while attending law school. Judge Keenan was raised by his mother on public assistance, was arrested and charged as a youth, and dropped out of school after repeated suspensions, later earning his GED. 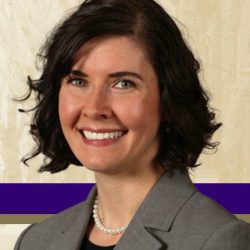 Lindy Laurence is a Gates Public Service Law Scholar at the University of Washington School of Law. Prior to attending law school, Lindy was the Assistant Director of Legal Programs at Volunteer Legal Service in Pierce County. Lindy served on the board of the Incarcerated Mothers Advocacy Project from 2014-2016 and currently serves as the President of the Board for Northwest Community Legal Advocates, a non-profit law firm. 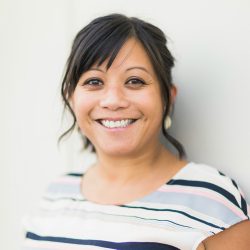 Michelle Lucas joined the Access to Justice Board in 2017. She is the Managing Attorney for the Northwest Justice Project's Eviction Prevention Unit. Previously Michelle served as the Associate Director at the Tenant Law Center and as a Staff Attorney at Sexual Violence Legal Services of the YWCA where she provided civil legal assistance to survivors of sexual assault. She clerked for Judge Michael Downes of the Snohomish County Superior Court, and prior to that worked in social services with the City of Seattle and Solid Ground, focusing on seniors and people with disabilities. Michelle spent several years as a volunteer domestic violence victim advocate with the Seattle Police Department Victim Support Team, and is a current volunteer with KCBA’s Neighborhood Legal Clinics. Michelle received her Juris Doctorate from Seattle University School of Law and her Bachelor of Arts from the University of Washington. 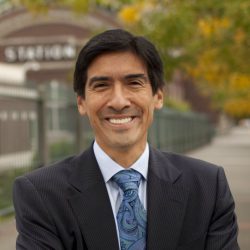 Salvador A. Mungia graduated from the Georgetown University Law Center in 1984 with honors. Since entering private practice with the law firm of Gordon Thomas Honeywell in 1986, Sal has worked to improve access to the justice system for those who cannot afford to hire an attorney. Immediately after starting private practice Sal became a cooperating attorney with the ACLU-W and began litigating civil rights, prisoner rights, and constitutional law claims. Sal has worked with a number of civil legal aid providers including Legal Voice, Northwest Justice Project, and Columbia Legal Services to represent indigent clients. Sal joined the Legal Aid for Washington Board of Directors in 1994 and served for 8 years and later became its president in 2002. He served as co-chair for the Campaign for Equal Justice from 2011 to 2012. Sal is completing a two-year term as the chair of the Equal Justice Coalition where he worked with the coalition’s lobbyist to educate state and federal legislators and he has been serving on the Board of Directors for the Endowment for Equal Justice since 2016.

Mirya Muñoz-Roach is the Chief Program Director for the Society of St. Vincent de Paul of Seattle | King County. Mirya holds a Master of Arts from Seattle University and a BA in Business Administration and Human Resource Management from the University of Florida. She was born and raised in Puerto Rico, is bilingual and bicultural, and brings over 25 years of experience, knowledge and skills working on issues of equity, multi-cultural diversity and inclusion. She has a lifetime experience working with communities of Latino/Hispanic origin and most recently working with other communities of color in the area of educational equity throughout the Roadmap project region. Mirya is a member of the 2017-2018 cohort of the JustLead Washington Leadership Academy. She sits on the Access to Justice Board where she is committed to elevating the voice of the non-legal community. She was recently elected as member of the 1st Road Map region’s “Community Leadership Team” comprised of visionary regional leaders working to achieve educational equity and community accountability across South Seattle and S. King County. Mirya is also a member of the Board of Directors for Catholic Schools, Valley Cities Behavioral Health, Sound Alliance/Industrial Areas Foundation of the Northwest, and a past member of the Diversity Commission for the City of Federal Way and the Kent City Diversity Initiative Group. Currently, Mirya serves as the Chair for the Multicultural/Diversity Commission for the SVdP District Council and a member of the National SVdP Hispanic/Latino Task Force. 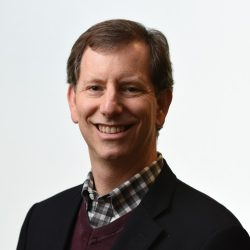 Terry Price is the Executive Director for Graduate Education at the University of Washington School of Law. In that role, he is responsible for the management and curriculum for J.D. and LL.M. students, and for advising current and prospective students about their academic paths. Terry has also taught health law courses for more than fifteen years, including Mental Health and Law, Beginning of Life: Rights and Choices, Legal Issues at the End of Life, HIV and Law, and also Family Law. Terry also teaches Family Law Fundamentals to the Limited License Legal Technician (LLLT) students. Prior to joining the law school, Terry was Senior Policy Counsel for the Washington House of Representatives Democratic Caucus, where he advised members about issues related to the House Judiciary, Public Safety and Early Learning/Children's Services committees. For 2017-18, Terry was the President of the QLaw (LGBT) Foundation Board of Washington and he was a 2006 Washington State Bar Association Leadership Institute Fellow. Terry also has a Master's in Social Work and worked as a clinical social worker in pediatric oncology and neonatology prior to entering law school. 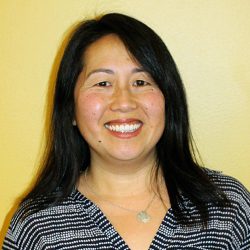 Diana Singleton (she/her) is the Chief Equity and Justice Officer at the Washington State Bar Association, where she provides support and leadership for the Washington State Bar Association’s work to advance equity and justice. She leads the Equity and Justice Department which manages the WSBA’s public service and diversity, equity and inclusion work and provides support and partnership to the Washington State Access to Justice Board, the Council on Public Defense, the WSBA Diversity Committee, the WSBA Pro Bono and Public Service Committee, the WSBA Equity and Disparity Workgroup and the Minority Bar Association leaders. She previously served as the Director of Seattle University School of Law’s Access to Justice Institute (ATJI) which serves as a bridge between the law school and larger equal justice community. Prior to joining ATJI, Diana was an attorney with the Northwest Justice Project for almost ten years, practicing in the areas of consumer, family, low-wage worker, and public benefits law. Diana serves on the Board of Communities Rise which offers transactional pro bono assistance to nonprofit organizations and low-income small business owners, and JustLead Washington which offers capacity-building services centered on leadership development, race equity and collaboration. She is a proud alumna of Seattle University School of Law, Westmont College, and the Washington Equal Justice Community Leadership Academy. 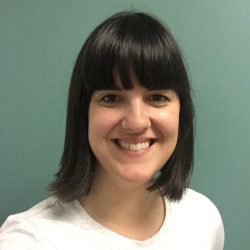 Bonnie (she/her) is the Equity and Justice Specialist at the Washington State Bar Association (WSBA), providing staff support to the Access to Justice Board and WSBA’s Council on Public Defense. Bonnie brings with her almost two decades of experience in project management, event planning, communications, volunteer management, and nonprofit administration. Bonnie has a Masters in Public Administration from Seattle University and a B.A. from Willamette University. Bonnie is a graduated of the Washington Equal Justice Community Leadership Academy.