A Trip to Montgomery, Alabama

Contributed by Salvador Mungia, Access to Justice Board Chair

Discomfort. Disbelief. Admiration. Anger. Pain. Sorrow. Loss. These were some of the emotions we went through. The images we saw will be forever etched in our memory and our consciousness.

We were a group of about 20, all of us committed to furthering access to the civil justice system. We went to Montgomery, Alabama, this past fall to visit two relatively new sites, the Legacy Museum and the National Memorial for Peace and Justice (aka the “Lynching Memorial”). Both sites deal with the dehumanization, oppression, and torturing, maiming, and killing of Black Americans, and are dedicated to recognizing past wrongs, documenting current effects, and hopefully prodding future action. It would be a shame to visit these two sites and not be spurred to act.

The trip, organized by the Endowment for Equal Justice, included board members, donors, and friends of the EEJ. Merf Ehman and Travis Andrews, both of Columbia Legal Services, guided us through discussions of race and racism that can all too often have hidden landmines, leaving honest discussion stillborn if not carefully navigated.

The Legacy Museum, from the outside, looks nondescript and small. Once you step inside you are overwhelmed by the history presented—from slavery, lynchings, and the Jim Crow era up to modern-day mass incarceration. While certainly facts and information are on display, what is most moving are the stories of families being torn apart, of incredible hatred, of heartbreaking suffering. 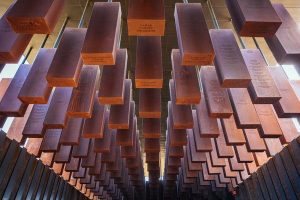 Located not more than half a mile from the Legacy Museum, the Lynching Memorial has 800 weathered steel columns, all suspended from the ceiling. The columns are organized by county, and etched in each are the names of the Black victims of domestic terrorism. There are a few plaques that briefly describe why some were lynched. One example: “After a white man attempted to assault Jack Brownlee’s daughter in Oxford, Alabama, in 1894, Mr. Brownlee was lynched for having the man arrested.” The number of recorded lynchings in America: 4,400. Walking through the Memorial, you know you are on sacred ground.

If you get the chance, go to Montgomery. Walk through the Memorial. Hear the stories. Feel the pain. Be changed and, in turn, make change.