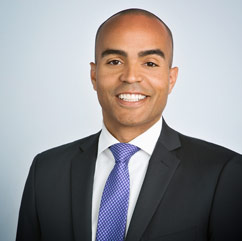 Nicholas Brown will keynote the closing keynote at the Access to Justice Conference on Sunday, June 16. Nicholas is a Partner with Pacifica Law Group, former General Counsel to the Governor of Washington, and prior Assistant US Attorney in the US Attorney’s Office, Western District of Washington. Maria Kolby-Wolfe, Development and Communications Director with the Northwest Immigrant Rights Project, recently sat down with Nicholas to learn more about his background and his insights on community, justice and the law.

Question: When and why did you decide to become a lawyer?

Brown: I went to law school in college on a ROTC scholarship. Usually college comes first, then military. But I thought it would be interesting to enter the military as a JAG. I was interested in policy and politics but found that I liked legal work!

Question: The Army. Morehouse. Harvard. What did each of them teach you about justice and community?

Brown: They all taught me a lot – for better or worse!

At Morehouse. For me the lasting lesson Morehouse taught me was about the diversity of the black community. I grew up here, near Fort Lewis. Here in this area we take pride in being liberal, progressive, and in our diversity which is, comparatively speaking, better than many other places. Where we fail is not understanding the diversity within these groups. We hold stereotypes based on background. At Morehouse there are 18 to 22 year-old black men from all over America – and it has everybody. Athletes. Smart kids. Sci-fi Geeks. The social status of being black, that would be all one type here, was made up of all different groups there. Such a valuable lesson about diversity. I learned more about diversity there than anywhere else.

The military. What I appreciated is that it really does throw all these different types of folks into one bucket and forces you to get along, get together, problem-solve, and get things done. Which is why it has been a leader in diversity, despite its conservatism and traditions.

Harvard. It was interesting. It was less about justice and more about community. I loved law school. So many interested, talented people! But I learned as much from my classmates as I did from my professors.

Question: What is the relationship between law and community?

Brown: In general, most people interact with law in its negative aspect, especially with criminal justice. You’re a victim or you know a victim. So people are not well versed in law except when it’s negative. Even in civil context we are in our worst moments. Family law – divorce, children etc. With civil legal aid, you see the number of people impacted, we see that issues steamroll into one another. It’s not one legal issue, it’s a half a dozen or more. Community engagement advocacy work has, for years, pushed to see how the law can be a source for proactive work. Civil legal aid and community – it changes the fundamentals of our system.

Question: The theme for the Access to Justice Conference this year is Amplifying the Power of our Community. What about this theme spoke to you? Inspired your participation?

Brown: I’d been to the conference before, and I appreciate the work that goes into it. All the brain power that gets in the room to solve difficult problems. In my last role with the Governor I did lots of criminal justice policy work. I interacted with judges, lawyers, and people from all across the state, working through policy issues around criminal and civil rights…So this theme spoke to me.

Question: What is one of the biggest misconceptions about the American legal system that you wish more people understood?

Brown: A friend of mine from law school was teaching a class. He’s younger, someone I thought of as progressive and a real firebrand. But the class saw him as an institutionalist. People don’t think you can work within the system to impact change. But we need people on the outside bringing the fire on issues, advocates. And it takes both– fire and brimstone and people sitting across the table and having a conversation about impacting the community.

← Sandra Williams to Keynote 2019 Access to Justice Conference
A Trip to Montgomery, Alabama →